These - and some other questions - will be answered in this article. And because you may want to know more information than this article provides, for most of the topics we offer links to our archives - to articles covering selected important topics in great detail.

How to take 3D photos 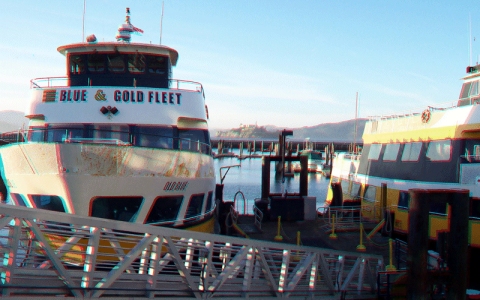 It is clear that you have to choose some interesting scene first. Scene Selection is a bit more challenging when creating 3D photos than with the regular photos. Why? Because you want the 3D effect of your shots to be clearly visible. So it is a good idea to photograph a scene where are more objects in different distances from the camera. Thus, if mountains are in the background, something should be in the foreground - like shrubs, trees or a house. The situation is simpler in rooms where some objects are normally closer and others further. For example some chairs and a table in front and a wall in the background.

To get the fully 3D (stereoscopic) photo, you need to take the scene from two different angles. So instead of one picture you make two. During the first and second shooting you should hold the camera at the same height and with the same tilt, and nothing on the scene should be changed. There is one great trick: If there is enough light around, you can turn on a function for taking of a serie of images on your camera. And when you press the trigger, slowly shift the camera to the right. This way you get a serie of pictures - and you can use the trial and error process to select the best two photos to create a perfect 3D image.

For creating of 3D images/3D photos we recommend the 3DJournal 3.2 software - here.

Description of the trick with a serie of images

More information about the 3DJournal 3.2 software

How to convert old photos into 3D The best you can do is always to take 3D photos, but it is not always possible. Maybe you have some old photos or you need to use your normal 2D camera and there is a motion on the scene. In these cases you need to convert 2D photos into 3D. Even when attempts were made to automate these conversions, the results are usually not good. But it's fairly easy to perform that conversion manually.

Use an appropriate software and open your 2D photo there. And then just tell the software what objects in the photo are closer to you and what are more distant. The easiest way to do it is through the so-called 3D masks. How do they work? The closer something is on the photo, the lighter it will be on the mask, the further it is, the darker it will be on the mask. A man in the foreground will be white, a car behind him gray and a house in the background black. And then just tell the program to perform the conversion from 2D to 3D.

For 2D to 3D conversion use the 3DJournalDX software - here. It also includes a built-in editor of 3D masks.

More information about converting photos from 2D to 3D

How to record 3D video

To record 3D videos and 3D movies is quite easy. Either you need a 3D camera or two cameras (or two movie cameras). When buying a 3D camera you probably get a software for creating of 3D video as well. When using a pair of 2D cameras or movie cameras it will be a bit more difficult.

Both cameras/movie cameras will be filming standing next to each other and heading to the scene. After recording you open the footage from the left camera in a video conversion software - for example in the VirtualDub, which is free - and by two mouse clicks save the individual frames of the recording. Then you do the same with the video from the right camera. In the 3DJournal software then use batch processing to all the frames and it will create, automatically frame by frame, all the 3D frames. Then create the 3D video from the 3D frames - in the VirtualDub again.

Video tutorial: How to create a 3D video

Tips for recording of 3D video (warning: the software mentioned there is already outdated)

The trick - how to convert 2D video to 3D

How to create 3D pictures

3D images can also be created in a number of specialized programs. Just create a scene and then finalize (render) it from two perspectives - from the perspective of the right eye and the left eye. Some of these programs, however, are not easy to work with unless you are experienced enough, so you can try something simpler at the beginning. For example the LDraw program for creating 3D objects from Lego.

How to create 3D images of Lego (warning: links in the text may be outdated, use the one mentioned above)

How to draw 3D images

Other 3D tips and tricks

More 3D tips and tricks can be found in our archives of articles. We just have to point out one thing: The 3DJournal Magazine is in existence since 2003, so some of the articles may contain outdated information. Yet they may bring you some inspiration.