Over all the years we and members of the former 3DJournal club created many 3D photos and some 3D videos. Here is a selection of the best of them.

At the beginning however, we should say, that all the pictures you can see here are visible through the classic red-cyan glasses - thanks to the so-called Anaglyph stereoscopic system. The advantage of this system is that these glasses are readily available and can be purchased for example in the famous Aliexpress.com store. And they cost literally a couple of cents including postage. 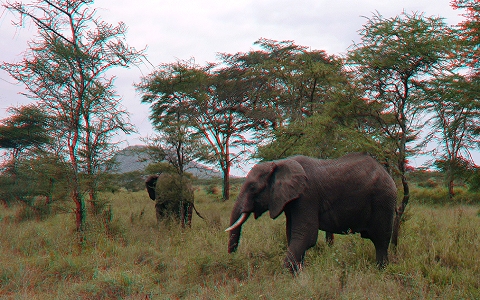 Let's start with a bit of exotica. In Tanzania - in Central Africa - we were taking 3D photos using two cameras. This enabled us to shoot even the moving animals in the safari. In the 3D gallery of Tanzania and you can see giraffes, zebras and elephants. Besides the safari, however, this gallery offers some views of beaches of Zanzibar and Mt. Kilimanjaro surroundings.

Tanzania 3D gallery (click on a photo, then use the arrow below it to move between photos)

In Tanzania we were filming our 3D video as well, you can see it here

The video and the photos were made using the 3DJournal 3.2 software

And here are some 3D photos from Thailand. In this case we were using just one camera - and the "one camera trick" with the movement of the camera. It allowed us to make 3D photos quickly and easily, but as you can see, there are not any moving objects on the photos. Nevertheless, we believe you will enjoy them. Let's go to Europe now. During our visit to Paris we - again with just one camera - made a serie of photographs of this beautiful city. There are images of the Eiffel Tower, Notre Dame, the Louvre and also of La Défense.

And now let's look to Central America, specifically to Costa Rica. During our visit to this fascinating country we had only one camera again and we used it to take a serie of 3D images. There are photographs of flora of the national parks, volcanoes and some buildings as well.

And now - let's look to South America, specifically to Peru - and to the famous Machu Picchu. In this gallery there are 3D photographs from different angles of this archaeological jewel of the world.

A little more of 3D photos

If you want to see all our 3D galleries of many places of the world, head here: 3D Gallery. There you will find 3D images even from the USA, Spain, Austria, Italy or Prague.

As we wrote in the introduction to this article, our users also created many great 3D photos in the last few years. One gallery is really extensive - and it's the gallery of Mr. Bohdan Gadžuk. Mr. Gadžuk unfortunately already left our world, but his 3D pictures are still here - and can be seen here.

Photographs of all users can be found here in the User gallery.

3D photos and 3D videos of course exist not only here on our 3DJournal web site. Here are a few tips for interesting 3D videos on YouTube: